Notes on an Execution (MP3 CD) 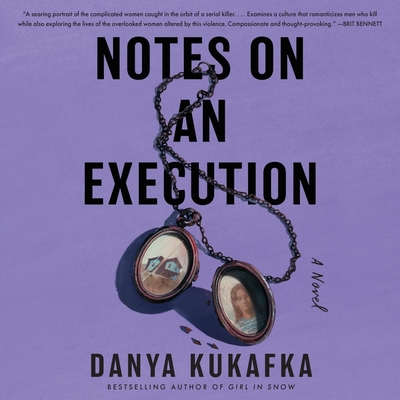 By Danya Kukafka, Mozhan Marnò (Read by), Jim Meskimen (Read by)
$41.99
Email or call for price

“Notes on an Execution flows like a quiet river coming to a waterfall — lyrical, tense, and quietly explosive. This book is full of compassion for each character, even the killer to be executed. Kukafka has outdone herself with this book.”
— Annie Philbrick, Bank Square Books, Mystic, CT

A searing portrait of the complicated women caught in the orbit of a serial killer. . . . Compassionate and thought-provoking. -BRIT BENNETT, #1 New York Times bestselling author of The Vanishing Half

A profound and staggering experience of empathy that challenges us to confront what it means to be human in our darkest moments. . . . I relished every page of this brilliant and gripping masterpiece.--ASHLEY AUDRAIN, New York Times bestselling author of The Push

In the tradition of Long Bright River and The Mars Room, a gripping and atmospheric work of literary suspense that deconstructs the story of a serial killer on death row, told primarily through the eyes of the women in his life--from the bestselling author of Girl in Snow.

Ansel Packer is scheduled to die in twelve hours. He knows what he's done, and now awaits execution, the same chilling fate he forced on those girls, years ago. But Ansel doesn't want to die; he wants to be celebrated, understood.

Through a kaleidoscope of women--a mother, a sister, a homicide detective--we learn the story of Ansel's life. We meet his mother, Lavender, a seventeen-year-old girl pushed to desperation; Hazel, twin sister to Ansel's wife, inseparable since birth, forced to watch helplessly as her sister's relationship threatens to devour them all; and finally, Saffy, the detective hot on his trail, who has devoted herself to bringing bad men to justice but struggles to see her own life clearly. As the clock ticks down, these three women sift through the choices that culminate in tragedy, exploring the rippling fissures that such destruction inevitably leaves in its wake.

Blending breathtaking suspense with astonishing empathy, Notes on an Execution presents a chilling portrait of womanhood as it simultaneously unravels the familiar narrative of the American serial killer, interrogating our system of justice and our cultural obsession with crime stories, asking readers to consider the false promise of looking for meaning in the psyches of violent men.

Spellbinding and beautifully written . . .an irresistible, unbearably tense thriller; a poignant, deeply compassionate tale of resilience; and a vital intervention in the way we talk about violent crime. --MEGAN ABBOTT, New York Times bestselling author of The Turnout