The Last to Vanish: A Novel (Paperback) 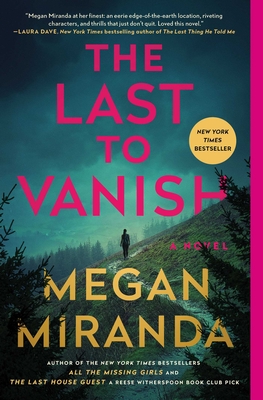 “I really enjoyed the mystery and how it unraveled for Abigail and Trey, and how the disappearances are connected. Megan Miranda is a great writer and I am always eager to read her new books — this didn’t disappoint!”
— Stephanie Rivera, Chapter Two...a Bookstore, Lompoc, CA

“This eerie thriller…can stand next to Shirley Jackson’s The Haunting of Hill House and Stephen King’s The Shining.” —Booklist (starred review)

New York Times bestselling author Megan Miranda returns with a gripping and propulsive thriller that opens with the disappearance of a journalist who is investigating a string of vanishings in the resort town of Cutter’s Pass—will its dark secrets finally be revealed?

Ten years ago, Abigail Lovett fell into a job she loves, managing The Passage Inn, a cozy, upscale resort nestled in the North Carolina mountain town of Cutter’s Pass. Cutter’s Pass is best known for its outdoor offerings—rafting and hiking, with access to the Appalachian trail by way of a gorgeous waterfall—and its mysterious history. As the book begins, the string of unsolved disappearances that has haunted the town is once again thrust into the spotlight when journalist Landon West, who was staying at the inn to investigate the story of the vanishing trail, then disappears himself.

Abby has sometimes felt like an outsider within the community, but she’s come to view Cutter’s Pass as her home. When Landon’s brother Trey shows up looking for answers, Abby can’t help but feel the town closing ranks. And she’s still on the outside. When she finds incriminating evidence that may bring them closer to the truth, Abby soon discovers how little she knows about her coworkers, neighbors, and even those closest to her.

Megan Miranda brings her best writing to The Last to Vanish, a riveting thriller filled with taut suspense and shocking twists that will keep you guessing until the very end.

Megan Miranda is the New York Times bestselling author of All the Missing Girls; The Perfect Stranger; The Last House Guest, a Reese Witherspoon Book Club Pick; The Girl from Widow Hills; Such a Quiet Place; and The Last to Vanish. She has also written several books for young adults. She grew up in New Jersey, graduated from MIT, and lives in North Carolina with her husband and two children. Follow @MeganLMiranda on Twitter and Instagram, @AuthorMeganMiranda on Facebook, and visit MeganMiranda.com

"This eerie thriller, in which the setting itself may be actively malevolent, can stand next to Shirley Jackson’s The Haunting of Hill House and Stephen King’s The Shining ... Expect shivers and lots of them."
—Booklist (starred)

"The Last To Vanish is Megan Miranda at her finest: an eerie edge-of-the-earth location, riveting characters, and thrills that just don't quit. Loved this novel."
—Laura Dave, New York Times Bestselling author of The Last Thing He Told Me

“Miranda is a master of misdirection and sudden plot twists.”
– Booklist (Starred Review)

“And, oh boy, does [Megan] ever know how to write a twisty-turny ending (or two, or more).”
—Marilyn Stasio, New York Times Book Review

"Fans of Gillian Flynn, Chevy Stevens, and Jennifer McMahon will devour this relentlessly paced and deftly plotted thriller... The story moves at a feverish, unfaltering pace, keeping readers just as perplexed as the characters."
—Publishers Weekly

"Highly recommended for fans of Alafair Burke, Gillian Flynn, and Lisa Lutz, and for all readers who like their female characters clever and resourceful, even when their best friends become their worst nightmares.”
—Booklist

PRAISE FOR SUCH A QUIET PLACE

“Miranda, who makes the setting, where everyone knows one another and ends up fearing one another, all the more chilling for its seeming normality, is a master of misdirection and sudden plot twists, leading up to a wallop of an ending. A powerful, paranoid thriller.” – Booklist (Starred Review)

“A claustrophobic and suspenseful whodunit…that ponders the eternal question of how well we really know those closest to us.” – BookPage (Starred Review)


PRAISE FOR THE GIRL FROM WIDOW HILLS

"Sleepwalking is creepy. You’re asleep, but you're walking through the night—like the living dead. I knew when I started The Girl from Widow Hills I was in for some shivers. But I had no idea the terrors that were in store.”—R. L. STINE, bestselling author of Goosebumps and Fear Street

“A hauntingly atmospheric and gorgeously written page-turner, The Girl from Widow Hills is a deeply thought-provoking, riveting mystery about the complex weight of history and the dangerous power of the lies we tell ourselves.”—KIMBERLY McCREIGHT, New York Times bestselling author of Reconstructing Amelia and A Good Marriage


PRAISE for ALL THE MISSING GIRLS

"In All the Missing Girls Megan Miranda leads readers back through the past of a small southern town, enfolding them in a slow, tense nightmare of suspicion, menace, and tangled motives. A twisty, compulsive read--I loved it." — Ruth Ware, author of IN A DARK, DARK WOOD

PRAISE FOR THE LAST HOUSE GUEST

“The perfect summer thriller . . . with a pace that made my heart race.” —Riley Sager, New York Times bestselling author of The Last Time I Lied

“Oh boy, does she ever know how to write a twisty-turny ending (or two, or more).” —Marilyn Stasio, The New York Times Book Review

“A lightning-fast mystery . . . that will have readers on the edge of their seats.”—MARY KUBICA, New York Times bestselling author of The Good Girl