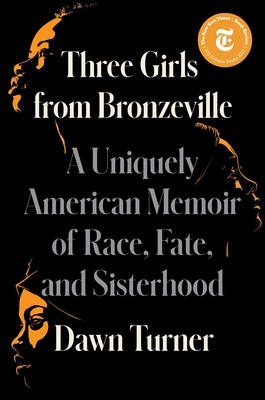 This beautifully written memoir features the intertwined lives of the author, her sister and childhood friend. Written in fresh, understated prose, the author explores how their lives diverge – in ways heartbreaking and hopeful, despairing and redemptive. Three Girls is one of the best books I've read this year and I hope it gets the attention and awards it deserves.

A “beautiful, tragic, and inspiring” (Publishers Weekly, starred review) memoir about three Black girls from the storied Bronzeville section of Chicago that offers a penetrating exploration of race, opportunity, friendship, sisterhood, and the powerful forces at work that allow some to flourish…and others to falter.

They were three Black girls. Dawn, tall and studious; her sister, Kim, younger by three years and headstrong as they come; and her best friend, Debra, already prom-queen pretty by third grade. They bonded—fervently and intensely in that unique way of little girls—as they roamed the concrete landscape of Bronzeville, a historic neighborhood on Chicago’s South Side, the destination of hundreds of thousands of Black folks who fled the ravages of the Jim Crow South.

These third-generation daughters of the Great Migration come of age in the 1970s, in the warm glow of the recent civil rights movement. It has offered them a promise, albeit nascent and fragile, that they will have more opportunities, rights, and freedoms than any generation of Black Americans in history. Their working-class, striving parents are eager for them to realize this hard-fought potential. But the girls have much more immediate concerns: hiding under the dining room table and eavesdropping on grown folks’ business; collecting secret treasures; and daydreaming about their futures—Dawn and Debra, doctors, Kim a teacher. For a brief, wondrous moment the girls are all giggles and dreams and promises of “friends forever.” And then fate intervenes, first slowly and then dramatically, sending them careening in wildly different directions. There’s heartbreak, loss, displacement, and even murder. Dawn struggles to make sense of the shocking turns that consume her sister and her best friend, all the while asking herself a simple but profound question: Why?

In the vein of The Other Wes Moore and The Short and Tragic Life of Robert Peace, Three Girls from Bronzeville is a piercing memoir that chronicles Dawn’s attempt to find answers. It’s at once a celebration of sisterhood and friendship, a testimony to the unique struggles of Black women, and a tour-de-force about the complex interplay of race, class, and opportunity, and how those forces shape our lives and our capacity for resilience and redemption.

Dawn Turner is an award-winning journalist and novelist. A former columnist and reporter for the Chicago Tribune, Turner spent a decade and a half writing about race, politics, and people whose stories are often dismissed and ignored. Turner, who served as a 2017 and 2018 juror for the Pulitzer Prize in commentary, has written commentary for The Washington Post, PBS NewsHour, CBS Sunday Morning News show, NPR’s Morning Edition show, the Chicago Tonight show, and elsewhere. She has covered national presidential conventions, as well as Barack Obama’s 2008 presidential election and inauguration. Turner has been a regular commentator for several national and international news programs, and has reported from around the world in countries such as Australia, China, France, and Ghana. She spent the 2014–2015 school year as a Nieman Journalism fellow at Harvard University. In 2018, she served as a fellow and journalist-in-residence at the University of Chicago Institute of Politics. Turner is the author of two novels, Only Twice I’ve Wished for Heaven and An Eighth of August. In 2018, she established the Dawn M. Turner and Kim D. Turner Endowed Scholarship in Media at her alma mater, the University of Illinois at Urbana-Champaign.

“Wholehearted…Turner interrupts the monolithic narrative of Black Chicago as ruined and broken, as well as the one-note stereotypes about growing up in public housing. In their place she offers a textured portrait of a moment in time in a particular place…Like the poet Gwendolyn Brooks and the playwright Lorraine Hansberry, she is a native daughter of Black Chicago with a bone-deep knowledge of the place and its people.”—New York Times Book Review

“An exceptional work, a memoir told with honesty, grit and a sly wit that continually takes readers to unexpected places…I’m hooked on these women.”—Washington Post

“Dawn Turner is the perfect person to tell this heartbreaking yet gorgeous tale of three Black girls from the Bronzeville section of Chicago as they come of age during the 1970s. And not just because it’s partially her story, but because her lengthy career as a journalist who has reported on stories from all across the globe makes her uniquely capable of weaving an intricate, deeply researched and reported tale, but also one with heavy personal implications, an enormous amount of heart, and a remarkable measure of poise. Turner’s memoir is an achievement on many levels, not the least of which is the fact that it’s just downright entertaining as well. Highly recommended.”—Shondaland

"By turns beautiful, tragic, and inspiring, [THREE GIRLS FROM BRONZEVILLE] is a powerful testament to the bonds of sisterhood and the importance of understanding the conditions that shape a person’s life choices.”
—Publishers Weekly *starred review*

"[Dawn Turner] has a stellar ability to present the personalities of her loved ones, especially the women in her life. This memoir is a compelling testament to the power of women’s relationships."—Library Journal *starred review*

“Exceptional…This deeply personal and thought provoking read is the nonfiction pick your book club has been waiting for.”—Real Simple

“Beautifully written, emotionally intense, suspenseful, candid and compassionate, Turner’s memoir describes how the bonds of sisterhood shaped Dawn, Debra and Kim, each of them “nicked and chipped, bruised and battered.” Like so many of us, she struggles to explain the inexplicable.”—Florida Courier

"Heartfelt...this book offers hope to anyone who wonders whether, after a terrible crime, attempts at reconciliation are worth it. Turner doesn’t sugarcoat the difficulties, but she leaves no doubt that—when the process works—the gains are vast."—Kirkus

“Three Girls from Bronzeville is such a beautiful and shattering book, and a rare read in which the delicate craft of the writing itself matches the depth of the themes it explores: coming of age, the invisible burdens of abandonment and poverty and racism, the impossible loyalties of friendship, triumph and regret, and—above all—love. This story is told with grace, humility, and courage. It will remain with me always.”
—Jeff Hobbs, author of The Short and Tragic Life of Robert Peace

“Dawn Turner’s Three Girls from Bronzeville is a beautiful ode to friendship and family, and an openhearted story of the unique journeys of Black women. Turner’s story, told with unwavering candor, is by turns heartbreaking and stirring. This poignant memoir wouldn’t let me go.”
—Alex Kotlowitz, author of An American Summer

“Deep love and deep loss thrum throughout Dawn Turner’s poignant and stunning memoir, a tale of sisterhood and friendship between three girls across time and place. Heartbreak but also redemption fuel this complex and nuanced story, upending everything we think we know about Black women who lose their way. The seamless blend of personal tale and astute reportage is remarkable, given that the book is also a suspenseful page-turner. I read breathlessly and choked up often, thinking, There but for the grace of God go I.”
—Bridgett M. Davis, author of The World According To Fannie Davis