The Education of Ernie Dumas: Chronicles of the Arkansas Political Mind (Paperback) 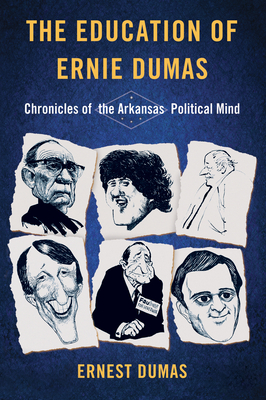 Like The Education of Henry Adams, the early twentieth-century classic from which this book derives its name, Adams described the ascent, or descent, of a postwar social and political order into something that a few people called modernity. But Dumas follows this evolution, not in the United States as Adams did, but in insular Arkansas.

Beginning with the defeat of Governor Francis Cherry by the son of a hillbilly socialist at the end of the Joe McCarthy era, Dumas traces the development of a modernist political cast that eventually produced Arkansas’s first president of the United States. It follows the seed from 1978 that would germinate into the second impeachment of an American president.

Dumas has written for newspapers and about politics for sixty-three years, since 1954, the year that the stolid Cherry fell to Orval Eugene Faubus. The book is a political memoir that describes not only his education in the ways of politicians but the politicians’ own education and miseducation in how you win voters and then how you get things done.

Ernest Dumas started reporting for the El Dorado Daily News and Evening Times in 1954. For thirty-two years, he was a political and state government reporter and an associate editor, editorial writer, and columnist for the Arkansas Gazette, until it closed in 1991. He continues to write for a number of state and national journals, including the Arkansas Times. He is an author or collaborator on several books, including The Clintons of Arkansas, Waiting for the Cemetery Vote, and Dearest Letty.