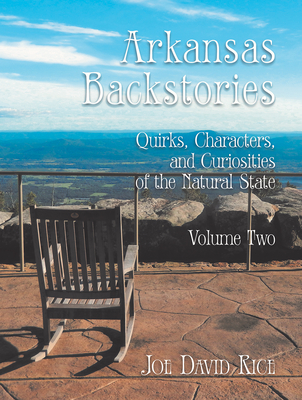 Like its companion book, this second volume of Arkansas Backstories will amaze even the most serious students of the state with surprising insights. How many people are aware that a world-class yodeler from Zinc ran against John F. Kennedy in 1960 for the top spot on the national Democratic ticket, or that an African-American born in Little Rock campaigned for the Presidency nearly 70 years before Congressman Shirley Chisholm made her historic run? Or that bands of blood-thirsty pirates once lurked in the bayous and backwaters of eastern Arkansas, preying on unsuspecting Mississippi River travelers?

Likewise, how many readers will recognize the fact that an English botanist who spent months investigating Arkansas’s flora in the early nineteenth century has been described as the worst explorer in history? That Fort Smith hosted the world’s first international UFO conference? Or that the Nielsen rating system has a direct connection to the state as does Tony Bennett’s signature song, “I Left My Heart in San Francisco”? Such tidbits are among the unexpected elements that make the Natural State so tantalizing.

Written in an informal, conversational style and nicely illustrated, Arkansas Backstories Volume Two will be a wonderful addition to the libraries of Arkansans, expats, and anyone else interested in one of America’s most fascinating states.

Joe David Rice, born in Paragould and reared in Jonesboro, is a well-known and respected resource on all things Arkansas. An accomplished promoter of the state as a “must-see-and-experience” destination, Rice served as Arkansas’s tourism director for thirty years, working under five governors. He enjoys exploring the Arkansas countryside, be it by foot, canoe, or car, and unearthing those lesser-known tidbits that make the Natural State so special.