Arkansas Women and the Right to Vote: The Little Rock Campaigns: 1868-1920 (Paperback) 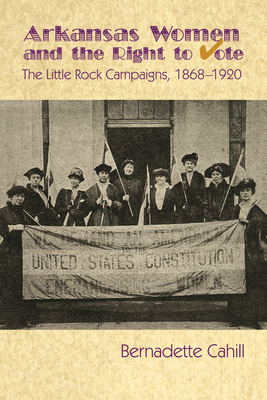 By Bernadette Cahill
$24.95
Email or call for price

Women from all over Arkansas—left out of the civil rights granted by the post–Civil War Reconstruction Amendments—took part in a long struggle to gain the primary civil right of American citizens: voting. The state’s capital city of Little Rock served as the focal point not only for suffrage work in Arkansas, but also for the state’s contribution to the nationwide nonviolent campaign for women’s suffrage that reached its climax between 1913 and 1920. Based on original research, Cahill’s book relates the history of some of those who contributed to this victorious struggle, reveals long-forgotten photographs, includes a map of the locations of meetings and rallies, and provides a list of Arkansas suffragists who helped ensure that discrimination could no longer exclude women from participation in the political life of the state and nation.

BERNADETTE CAHILL is an independent scholar who has authored several books on travel and history, including extensive writing about women’s suffrage. Born in Scotland, Cahill holds an MA Honors in medieval and modern history from the University of Glasgow.