The Ozarks: An American Survival of Primitive Society (Chronicles of the Ozarks) (Paperback) 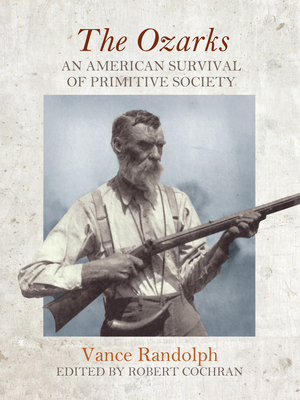 By Vance Randolph, Robert Cochran (Editor)
$29.95
On Our Shelves Now

Vance Randolph was perfectly constituted for his role as the chronicler of Ozark folkways. As a self-described “hack writer,” he was as much a figure of the margins as his chosen subjects, even as his essentially romantic identification with the region he first visited as the vacationing child of mainstream parents was encouraged by editors and tempered by his scientific training. In The Ozarks, originally published in 1931, we have Randolph’s first book-length portrait of the people he would spend the next half-century studying. The full range of Randolph’s interests—in language, in hunting and fishing, in folksongs and play parties, in moonshining—is on view in this book that made his name; forever after he was “Mr. Ozark,” the region’s preeminent expert who would, in collection after collection, enlarge and deepen his debut effort. With a new introduction by Robert Cochran, The Ozarks is the second entry in the Chronicles of the Ozarks series, a reprint series that will make available some of the Depression Era’s Ozarks books. An image shaper in its day, a cultural artifact for decades to come, this wonderful book is as entertaining as ever.

Vance Randolph was the author of many books on Ozark culture, including, in addition to The Ozarks, the bestselling Pissing in the Snow.

Robert Cochran is professor of literature at the University of Arkansas and the author of several books, including Vance Randolph: An Ozark Life.

“Anything you can do to keep The Ozarks alive and in print is a gift to folklorists and regional writers. Randolph was a proud Ozarker and a fine, zesty writer, a wit, a charmer. The Ozarks is maybe his most enduring treasure. We need to be reminded how this rascal of a writer held forth on his favorite subject.”

—Roger Abrahams, author A Singer and Her Songs: Almeda Riddle’s Book of Ballads

“In his invaluable and instructive introduction, Robert Cochran mentions that Randolph in fact had aspired to be a cultural anthropologist, in the holistic vein of Margaret Mead writing Coming of Age in Samoa, but had been rejected by Boas. In re-issuing Randolph’s 1931 work, Cochran, as well as Brooks Blevins, the Chronicles of the Ozarks series general editor, could be seen as simply promoting their own interests in Ozarkiana. But the significance of this work goes well beyond any regional constraints. Despite Randolph’s obvious Tylorian bias against the staying power of ‘primitive’ society, any folklorist reading his work would comprehend more fully the power of folklore’s raw material. Our humanity in all its possibilities, good and bad and indifferent, vibrates in the narrative that people construct of their lives, through their actions, words, and beliefs. Collectors like Randolph understood that, and were able to transmit what they collected through their own superbly crafted narratives.”
—John Wolford, Journal of Folklore Research, August 2018