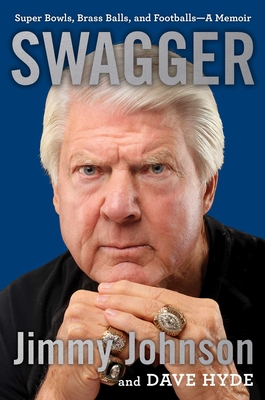 From FOX NFL Sunday analyst and legendary Hall of Fame head football coach Jimmy Johnson—the first to win both a college football championship and a Super Bowl—the long-awaited, intimate, no-regrets memoir recounting his extraordinary life and insightful lessons on winning, at every level.

Hall of Fame football coach Jimmy Johnson’s house isn’t on the way to anything. Yet, his private sanctuary on the Florida Keys’ Islamorada islands is a popular destination to which college and professional coaches, general managers, and team owners regularly trek to seek advice—how to build a positive team culture, draft elite players, balance work and family life, and lead a team to win. Why? Because Jimmy Johnson has done it all—rising through the college coaching ranks to lead the University of Miami Hurricanes to a national championship, winning two consecutive Super Bowls with the Dallas Cowboys, and handling public triumphs while dealing with private adversity. Now, in Swagger, written with veteran sports journalist Dave Hyde, Johnson shares a candid account of his life experiences that have turned him into a legend in the coaching world.

From his early days on the college football fields at Louisiana Tech to his arrival as the Cowboys’ coach in 1989, Swagger traces the history of Johnson’s career, and his lifelong mission to win. His larger-than-life personality and hard-driving, tough-talking coaching style led him to become one of only six coaches in NFL history to win back-to-back Super Bowls. Swagger shows the behind-the-scenes details of his professional conflict with Cowboys owner Jerry Jones and his personal revelations following his mother’s death and his son’s struggle with addiction. It reveals Johnson’s formula for winning, including his criteria for identifying talent, his core beliefs, how he replaced legendary coaches like Tom Landry and Don Shula, coached stars from a young Troy Aikman to an aging Dan Marino, and established the ever-elusive sense of “culture” that every team leader hopes to achieve. More than a highlight reel, Swagger reveals the hard-won lessons Jimmy Johnson has learned both as a man and as a coach through a lifetime dedicated to excellence.

Jimmy Johnson is the former NFL and college football head coach of the Dallas Cowboys, Miami Dolphins, and University of Miami Hurricanes. Johnson led the 1987 Hurricanes to win the College Football National Championship and the Dallas Cowboys to consecutive victories in Super Bowls XXVII and XXVIII in 1993 and 1994—the first football coach to win championships at the collegiate and professional levels. Since his retirement after the 1999 NFL season, Johnson has served as an analyst for FOX NFL Sunday program. Johnson was inducted into the College Football Hall of Fame in 2012, the Pro Football Hall of Fame in 2020, and the Broadcasting Hall of Fame in 2019 for his continued work on the FOX program. He spends as much time as possible at his home in Islamorada, Florida.

Dave Hyde is an award-winning sports columnist for the South Florida Sun-Sentinel where he has written for nearly three decades. His work been featured in the Best American Sports Writing anthology series, and he is the author of 1968: The Year That Saved Ohio State Football. He lives in South Florida.

"The winning trait Swagger emphasizes above all is Johnson’s elite ability to motivate people, to figure out what makes them tick and get them dancing to his tune.” —Texas Monthly

“The mark of a good book is that it reveals things about a subject you were sure you knew well. That’s how I felt reading Swagger. . . There’s a lot in here for extremely single-minded driven people, regardless of profession. The stories are superb.” —Peter King, Peter King’s Football Morning in America

"Jimmy has been a friend for over thirty years. I have deep respect for his ability as a football coach and as a team builder!” —Bill Belichick

"Coach Jimmy Johnson’s ‘swagger’ attitude—the pride, the discipline, the relentless drive to win he instilled—helped me to become the quarterback I hoped to be and win at the highest level. . . . I wish Jimmy had written Swagger before I played for him. Then, I would have known just how far he was ahead of us in our pursuit of Super Bowl glory.” —Troy Aikman

"Swagger is the perfect title for a book by Jimmy Johnson. The hard-charging personality and championship football philosophy captured in these pages reflects the Jimmy I know and manner with which he carries himself. The man personifies ‘swagger’!” —Terry Bradshaw