The Unkindness of Ravens (A Greer Hogan Mystery #1) (Paperback) 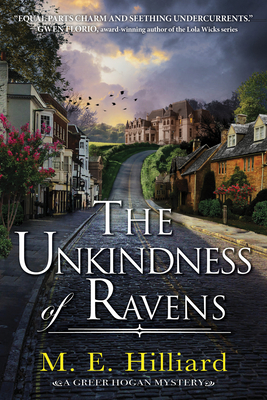 This is book number 1 in the A Greer Hogan Mystery series.

Greer Hogan is a librarian and an avid reader of murder mysteries. She also has a habit of stumbling upon murdered bodies. The first was her husband's, and the tragic loss led Greer to leave New York behind for a new start in the Village of Raven Hill. But her new home becomes less idyllic when she discovers her best friend sprawled dead on the floor of the library.

Was her friend's demise related to two other deaths that the police deemed accidental? Do the residents of this insular village hold dark secrets about another murder, decades ago? Does a serial killer haunt Raven Hill?

As the body count rises, Greer's anxious musings take a darker turn when she uncovers unexpected and distressing information about her own husband's death...and the man who went to prison for his murder . She is racked with guilt at the possibility that her testimony may have helped to convict an innocent man.

Though Greer admires the masters of deduction she reads about in books, she never expected to have to solve a mystery herself. Fortunately, she possesses a quick wit and a librarian's natural resourcefulness. But will that be enough to protect her from a brilliant, diabolical murderer?

And even if Greer manages to catch the Raven Hill killer, will living with her conscience prove a fate worse than death?

M. E. is currently a full-time librarian who started out in retail merchandising. Her first job was as an assistant buyer at Lord & Taylor, where her glamour position involved office space in the basement of the Fifth Avenue store. After twelve years of mergers, consolidations, and moves around the country, she went to graduate school and got a Master of Library Science degree. She has been in the information business ever since, working for public libraries small and large. Originally from the Connecticut shoreline, she has never lost her love of quaint small towns, big cities, and fashion, so she indulges that in her writing. A life-long lover of mystery fiction, M. E. currently lives and works in Florida.

Praise for The Unkindness of Ravens:
"[A] first-rate debut and series launch."
—Publishers Weekly, starred review

"Plenty of red herrings and a nice setup for a sequel."
—Kirkus Reviews

“The author is adept at using the weather outside to give the reader a foreshadowing of what's to come.”
—New York Journal of Books

"A chilling atmosphere...The book is well-plotted as the body count rises. It's well-written...with a bit of an edge."
—Suanne Schafer's Bookshelf