Shadow in the Glass (A Greer Hogan Mystery #2) (Hardcover) 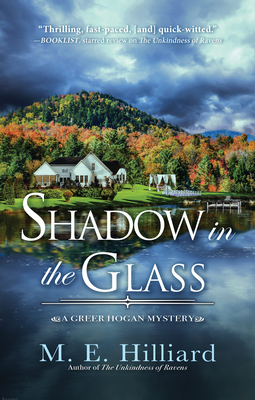 This is book number 2 in the A Greer Hogan Mystery series.

Murder rocks a wedding celebration at an idyllic lakeside home—and librarian-turned-sleuth Greer Hogan could be next on the killer’s guest list in this second exciting installment, perfect for fans of Louise Penny.

Librarian Greer Hogan is on hand to celebrate her old friend Sarah Whitaker’s nuptials at the Whitaker summer home on beautiful Mirror Lake, just outside the upstate New York village of Lake Placid. But Greer has an ulterior motive—to gather information that could reopen the investigation into her husband’s murder, a crime for which she believes an innocent man went to prison. Her plans come to a shuddering halt when a wedding guest goes missing and turns up dead in the lake. The guest, Brittany Miles, was an employee of the Whitaker family whom Sarah had long suspected was up to no good at work.

The police have no leads, but Greer—an avid reader of crime fiction who possesses an uncanny knack for deduction—begins her own investigation. She learns that the victim was seen with a mystery man right before she disappeared. Then the autopsy reveals that she didn’t drown in the lake after all, but in the reflecting pool in the Whitaker garden.

The suspect list is as long as the guest list itself, with no apparent motive. Now, Greer must rely on the wisdom of her favorite fictional detectives to tease out truth from lies—and keep herself out of the killer’s sights.

M. E. Hilliard is currently a full-time librarian who started out in retail merchandising. After twelve years of mergers, consolidations, and moves around the country, she went to graduate school and got a Master of Library Science degree. Originally from the Connecticut shoreline, she has never lost her love of quaint small towns, big cities, and fashion, so she indulges that in her writing. A life-long lover of mystery fiction, M. E. currently lives and works in Florida.

Praise for Shadow in the Glass:
“Easy to like and very smart.”
—Seattle Book Review

“For cozy aficionados, this read is sure to please.”
—New York Journal of Books

“A full on 'whodunnit' mystery laced with suspense, memorable characters . . . [and] unexpected plot twists and turns that makes for a compulsive page turning and fun read.”
—Midwest Book Review

“Plenty of red herrings and a nice setup for a sequel.”
—Kirkus Reviews

"A chilling atmosphere . . . The book is well-plotted as the body count rises. It's well-written . . . with a bit of an edge."
—Suanne Schafer's Bookshelf