The Last Nomad: Coming of Age in the Somali Desert (Hardcover) 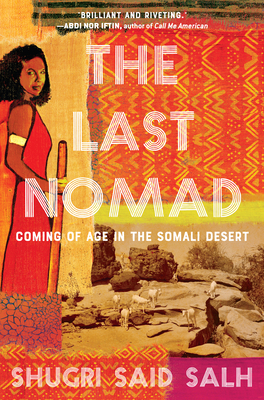 Reading the Last Nomad is like sitting with the author at a table with a cup a tea as she tells the story of her remarkable upbringing in Somalia. In candid, compelling prose, she shares her life as a nomad with her clan in the Somali desert, as a town dweller with her polygamous family and as a refugee from the civil war which tore her country apart. The lives of Somali women are the centerpieces of this engaging memoir, inviting us to understand their resilience and strength as they navigate their traditional and shifting roles in Africa and North America.

A remarkable and inspiring true story that "stuns with raw beauty" about one woman's resilience, her courageous journey to America, and her family's lost way of life.

Born in Somalia, a spare daughter in a large family, Shugri Said Salh was sent at age six to live with her nomadic grandmother in the desert. The last of her family to learn this once-common way of life, Salh found herself chasing warthogs, climbing termite hills, herding goats, and moving constantly in search of water and grazing lands with her nomadic family. For Salh, though the desert was a harsh place threatened by drought, predators, and enemy clans, it also held beauty, innovation, centuries of tradition, and a way for a young Sufi girl to learn courage and independence from a fearless group of relatives. Salh grew to love the freedom of roaming with her animals and the powerful feeling of community found in nomadic rituals and the oral storytelling of her ancestors.

As she came of age, though, both she and her beloved Somalia were forced to confront change, violence, and instability. Salh writes with engaging frankness and a fierce feminism of trying to break free of the patriarchal beliefs of her culture, of her forced female genital mutilation, of the loss of her mother, and of her growing need for independence. Taken from the desert by her strict father and then displaced along with millions of others by the Somali Civil War, Salh fled first to a refugee camp on the Kenyan border and ultimately to North America to learn yet another way of life.

Readers will fall in love with Salh on the page as she tells her inspiring story about leaving Africa, learning English, finding love, and embracing a new horizon for herself and her family. Honest and tender, The Last Nomad is a riveting coming-of-age story of resilience, survival, and the shifting definitions of home.

Shugri Said Salh was born in the Somali desert. In 1992, she immigrated to North America after civil war broke out in her home country. She attended nursing school at Pacific Union College and graduated with honors. Although this is her first book, Salh has been storytelling since she could talk. From her grandmother and the nomadic community in which she was raised, she heard stories and learned of their power to entertain, teach, and transform. When she isn't writing or telling stories, she works as an infusion nurse. She lives in Sonoma County with her husband and three children.

“Salh’s prose radiates with deep empathy and sensitivity, a reflection of the gift for storytelling she inherited from her poet grandmother. This stuns with its raw beauty.”
—Publishers Weekly

“A brilliant and riveting book . . . The Last Nomad introduces the reader to the real lives in Somalia and the resilience of its people not only inside the nation but beyond.”
—Abdi Nor Iftin, author of Call Me American

“Shugri Salh's The Last Nomad is a fascinating look at a disappearing culture. It's told from the perspective of a girl growing into womanhood in a place where women's value and virtue hinges on the actions of men. Salh's stories of bravery and resilience intersplice with those of everyday joy and struggle. They show her forever navigating the place where two worlds collide with grace and skill, as perhaps only a nomad can.”
—Tracey Baptiste, author of The Jumbies and African Icons: Ten People Who Shaped History

“A clear-eyed and moving chronicle of her coming-of-age during a tumultuous time in the history of her native Somalia . . . A thoughtful look at life in an often-misunderstood culture and region.”
—Kirkus Reviews