Sidney Chambers and The Dangers of Temptation (Grantchester #5) (Paperback) 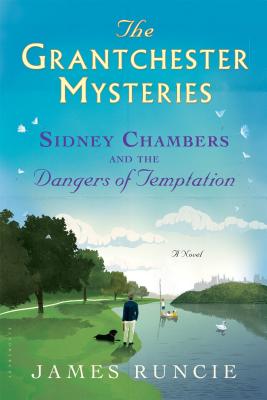 This is book number 5 in the Grantchester series.

The fifth installment in The Grantchester Mystery Series, and the inspiration for the primetime PBS/Masterpiece television series, Grantchester.

It’s the summer of love in late 1960s. The Apollo 11 astronauts are preparing to land on the moon, the war in Biafra dominates the news and Basil D’Oliveira has just been dropped from the England cricket team before a test series in apartheid South Africa. In the midst of all this change, Sidney Chambers, the loveable English clergyman, continues his amateur sleuthing investigations.

A bewitching divorcée enlists Sidney’s help in convincing her son to leave a hippie commune’ at a soiree on Grantchester Meadows during May Week celebrations, a student is divested of a family heirloom; Amanda’s marriage runs into trouble; Sidney and Hildegard holiday behind the Iron Curtain; Mrs. Maguire’s husband returns from the dead; and an arson attack in Cambridge leads Sidney to uncover a cruel cast of blackmail involving his former curate.

In the rare gaps between church and crime, Sidney struggles with a persistent case of toothache, has his first flutter at the Newmarket races, and witnesses the creation of a classic rock song.

Charming, witty, intelligent, and filled with a strong sense of compassion, these six new stories are guaranteed to satisfy and delight this clerical detective’s many fans.

"Runcie works his magic using simple sentences, archetypal characters and a sense of suspense that creates an atmosphere of delicious anticipation." —Independent

"There is no reason at all why this series should not run and run and why Sidney Chambers should not occupy the same place in the pantheon as Miss Marple or Poirot." —The Catholic Herald

"Runcie continues to deepen his characterization of Sidney Chambers in the six short stories set in the 1960s and 1970s that comprise the engrossing fifth volume of the Grantchester Mysteries." —Publishers Weekly