Sidney Chambers and The Forgiveness of Sins (Grantchester #4) (Paperback) 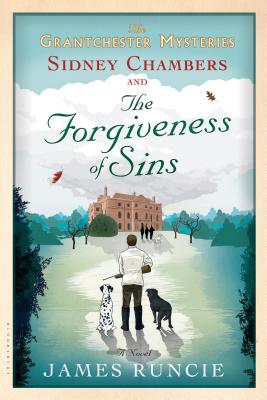 This is book number 4 in the Grantchester series.

The fourth in The Grantchester Mystery Series, and the inspiration for the primetime PBS/Masterpiece television series, Grantchester.

On a snowy Thursday morning in Lent 1964, a stranger seeks sanctuary in Grantchester’s church, convinced he has murdered his wife. Sidney and his wife Hildegard go for a shooting weekend in the country and find their hostess has a sinister burn on her neck. Sidney’s friend Amanda receives poison pen letters when at last she appears to be approaching matrimony. A firm of removal men 'accidentally' drop a Steinway piano on a musician’s head outside a Cambridge college. During a cricket match, a group of schoolboys blow up their school Science Block. On a family holiday in Florence, Sidney is accused of the theft of a priceless painting.

Meanwhile, on the home front, Sidney’s new curate Malcolm seems set to become rather irritatingly popular with the parish; his baby girl Anna learns to walk and talk; Hildegard longs to get an au pair and Sidney is offered a promotion.

Entertaining, suspenseful, thoughtful, moving and deeply humane, these six new stories are bound to delight the clerical detective’s many fans.

“Chambers is a winning protagonist, fervid in his faith yet prone to human frailty, and his exploits provide multiple pleasures for readers of cozies and beyond. The full Grantchester mystery series, projected to include six novels, will have a new entry in each of the next two years, and readers, as well as fans of the PBS show based on this series, should treasure them.” —Booklist

“The books have been made into a BBC/PBS series called 'Grantchester,' and I am happy to say that they have not suffered from TV fame--if anything, they are getting better.” —Seattle Times

“Each story is a different case, but the domestic events and small homey crises go on throughout, bringing a welcome and comforting continuity to the whole book. Thoroughly enjoyable, an updated cozy village with just a bit more sex and violence than we saw in Miss Marple's St. Mary Mead.” —The Historical Novels Society

“Sidney and the entire supporting cast, including a new curate with a fondness for cake, are all vividly portrayed, and comparisons to G.K. Chesterton's Father Brown books are amply justified.” —starred review, Publishers Weekly

“We should welcome him to the ranks of classic detectives.” —The Daily Mail

“Runcie is emerging as Grantchester's answer to Alexander McCall Smith . . . The book brings a dollop of Midsomer Murders to the Church of England, together with a literate charm of its own: civilized entertainment, with dog-collars.” —Spectator

“Chambers turns out to be a winning clergyman-sleuth, and Runcie's literary authority is repeatedly demonstrated in the construction of his elegant tales . . . there is no denying the winning charm of these artfully fashioned mysteries.” —Barry Forshaw, Independent

“The clerical milieu is well rendered as an affectionate eye is cast over post-war England--a perfect accompaniment to a sunny afternoon, a hammock and a glass of Pimm's.” —The Guardian

“The Sidney Chambers series may be comforting, but it's not simple. Runcie meant these novels to be a commentary on life in post-World War II Britain, and so they are. But the themes of good and evil, temptation and sacrifice, remain as fresh as today's news feed.” —Newsday

“For many, a perfect place to escape to is a British village of a certain era. Look no farther than the Grantchester mystery series (Sidney Chambers and the Shadow of Death, " " " the Perils of the Night, " " " the Problem of Evil and 2015's Sidney Chambers and the Forgiveness of Sins), published by Bloomsbury USA. James Runcie's atmospheric books . . . are delightful, with just enough darkness to give them a bite.” —Shelf Awareness