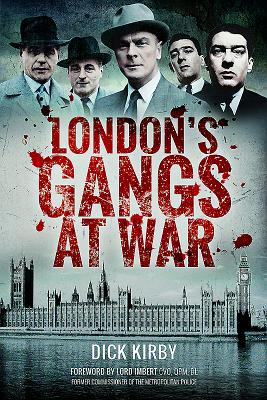 By Dick Kirby
Email or call for price.
Backordered

The 1950s and 1960s saw a changing of the guard in London's gangland. A new and even more ruthless breed of criminal emerged to replace the aging generation of likes of Sabini, Mullins and Hayes. Protection rackets on bookies, club owners and shops were commonplace. Prostitution and drugs offered rich pickings. Police corruption was all too commonplace. Thanks to media interest the names of Charlie Richardson, Mad Frankie Fraser, Scarface Smithson and the Nichols became as widely known as they were feared. And then there were the Kray Twins, whose notoriety and brutality became watchwords. But as this insider book reveals they did not have it all their own way. For a thrilling and shocking story London's Gangs at War is in a class of its own. What makes it so chilling is that the murders, torture and mayhem actually happened.