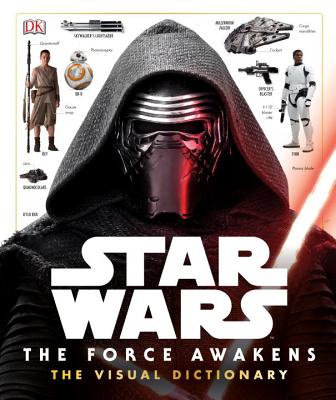 By Pablo Hidalgo
Email or call for price.
Not available

Explore the characters, Droids™, aliens, and creatures of the latest chapter in the Star Wars™ saga in this definitive guide to Star Wars: The Force Awakens™.

Written by Lucasfilm insider Pablo Hidalgo, Star Wars: The Force Awakens The Visual Dictionary offers an inside look into the film; and pop culture website i09 says the book "gives fascinating insight into the world behind the movie."

Learn the names and explanations behind all the details of costumes, weapons, and accessories and discover the dark origins of Kylo Ren. Including three exclusive, specially-commissioned cutaway models produced by Industrial Light & Magic model maker John Goodson, Star Wars: The Force Awakens The Visual Dictionary is the perfect addition to any fan's bookshelf.

Author Pablo Hidalgo is a creative executive within the Lucasfilm Story Group, a resident Star Wars™ authority who helps ensure consistency across a wide array of Star Wars projects. He has written several DK titles including most recently the bestselling Star Wars: The Force Awakens™ The Visual Dictionary. He lives with his wife in San Francisco, California.

"[The Force Awakens Visual Dictionary] gives some fascinating insight into the world behind the movie…" — io9.com

"Virtually every aspect of [The Force Awakens Visual Dictionary] is broken down into manageable bits. The book beautifully 'grounds the fantasy' and makes sense of even its most alien concepts." — StarWars.com

"[The] art is outstanding…" — GeekDad