All the Women in My Brain: And Other Concerns (Hardcover) 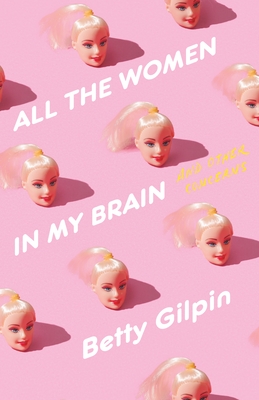 "If DAVID RAKOFF and DAVID SEDARIS had a baby and that baby was Betty." —Zoe Kazan

If you’ve ever felt like you were more, or at least weirder, than the world expected?
you're not alone...

In this collection, EMMY AWARD-nominated ACTRESS/WRITER Betty Gilpin "writes like an avenging angel, weaving a tapestry of light and darkness, hilarity, and pathos." (Dani Shapiro)

Oh. Hi. *takes six long gulps of water during which you’re like, may I help you?*

My name is Betty. I have depression. I have passion. I have tits the size of printers. And also: I have a brain full of women.

There’s Blanche VonFuckery, Ingrid St. Rash, and a host of others—some cowering in sweatpants, some howling plans for revolution, and one, oh God, and one . . . slowly vomiting up a crow? Worried for her. These women take turns at the wheel. That’s why I feel like a million selves. With a raised eyebrow and a soul-scalpel, I’d like to tell you how I got this way. Because maybe you feel this way too.

Let’s hop from wild dissections of modern womanhood to boarding school musings to the glossy cringe of Hollywood. Let’s laugh at my failures and then quietly hope with me for the dream. Whether that dream is love or liberation or enough IMDB credits to taze the demon snapping at my ankles, we won’t know until the shit-fanning end.

As a dear friend said after reading this book, it’s “either a masterpiece, or it’s…completely…” and then she glazed over into a haunted stare. Reader? This book is my opus and it is chaos.

Welcome to All the Women in My Brain.

Betty Gilpin is an Emmy, Critic’s Choice, and SAG Award–nominated actress and writer whose credits include GLOW, Gaslit, Roar, and Three Women, among others. She has—bravely—fake cried and fake died on your television with many different grasping-at-relevance hair colors. The blonde giveth, and the ginger taketh away. Her essays have been published in The New York Times, Glamour, Lenny Letter, The Hollywood Reporter, and Vanity Fair.

"An excoriating yet deeply comical collection of essays." —Bustle

"You must put down whatever is not thrilling you and immediately pick up this wildly original, laugh-out-loud, freakishly-incisive debut."
— Lisa Taddeo, #1 New York Times bestselling author of Three Women and Animal

“Betty Gilpin writes like an avenging angel, weaving a tapestry of light and darkness, hilarity, and pathos. This is a firecracker of a book, and with it, Gilpin has taken up residence with the rest of the women in my brain.”
— Dani Shapiro, New York Times bestselling author of Inheritance

"Betty Gilpin's voice is unlike anyone else's, in the best way. I laughed so hard, I cried, I gasped with recognition – I wanted to stay inside Betty's brain for as long as possible."
– Blythe Roberson, author of How to Date Men When You Hate Men

"With a mimosa in one hand and a hacksaw in the other, Betty Gilpin examines (and eviscerates) our preconceptions of womanhood, love, friendship, acting, Hollywood, and pretty much all other conventions that stand in her way. A writer of incomparable talent, Gilpin is real, raw, complicated—and mordantly funny."
– Phuc Tran, award winning author of Sigh, Gone

"Do you love Postcards from the Edge? Eve Babitz? Yourself, enough to experience joy? Then read this book. Betty Gilpin has articulated the mindfucks of being a woman and/or performer that I have longed to see explored, and found every gleefully absurd joke and profound insight hiding among them. I would follow her and her brainwomen to the ends of the earth."
— Tavi Gevinson, actor, writer, and founder of Rookie

"Working with the material of her own life as an actor... Gilpin critiques societal expectations that circumscribe creative women to docile beings, while suggesting that it’s the unruly parts of women’s minds that should be tended to as wellsprings of creativity."
— Publishers Weekly

"Gilpin is genuinely funny as a commentator on her own misadventures...The writing comes alive...when the author digs into the specific indignities she endured during her journey through the gauntlet of endless auditions and the merciless whims of those who orchestrated them."
— Kirkus Reviews

"Betty Gilpin, star of GLOW and The Hunt (and the upcoming series Three Women and Mrs. Davis), speaks her own creative language in this collection of thoughtful and often comic musings on identity, nonconformity, and what it means to make a living by pretending to be other people... Take the time to decode her metaphor-rich parlance and unique terminology, and you’ll find she has much to say." — The A.V. Club

"Through the 20 essays of Betty Gilpin’s All the Women in My Brain, the GLOW actor describes heartbreak and connection on and off set." — Vanity Fair

"Gilpin is deeply weird and very, very funny in this off-kilter collection of essays about her childhood, Hollywood, modern Hollywood and everything chaotic thought that enters her brain." — USA Today

"She invigorates well-worn debates about the pressures of being female, describing Hollywood’s appropriation of actress’s bodies with wryness and humour...The triumph of her narrative is in ‘learning to be a protagonist’; in regarding herself as an individual, she commands the ‘negative space’ to form her identity."" — Oxford Review of Books