A Deadly Secret: The Bizarre and Chilling Story of Robert Durst (Paperback) 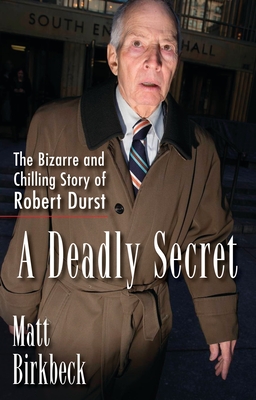 Even as he awaits trial, accused murderer Robert Durst can’t seem to stay out of the headlines. The subject of the HBO documentary The Jinx and the upcoming Lifetime movie The Lost Wife of Robert Durst, his story is as captivating as it is horrifying.

Here, from the first reporter to access Durst’s NYPD files, is the authoritative account of a decades-long criminal odyssey—the very book found in Durst’s own apartment when it was searched by police.

When medical student Kathie Durst vanished in 1982, she was married to Robert Durst, son of a New York real estate magnate. Kathie’s friends had reason to implicate her husband. They told police that Kathie lived in terror of Robert, and that she had uncovered incriminating financial evidence about him. But Durst’s secrets went even deeper. For decades, Kathie’s disappearance remained a mystery.

Then in 2001, Durst, an heir to an empire valued at two billion dollars, was arrested for shoplifting in Pennsylvania. When the police brought him in, they discovered that he was a suspect in the murder of Texas drifter Morris Black, whose dismembered remains were found floating in Galveston Bay, and that Durst was also wanted for questioning in the killing of his friend, Susan Burman, in Los Angeles.

Based on interviews with family, friends, and acquaintances of Durst, law enforcement, and others involved in the case, A Deadly Secret is a cross-country odyssey of stolen IDs and multiple identities that raises baffling questions about one of the country’s most prominent families—and one of its most elusive suspected killers.

Matt Birkbeck is an award-winning investigative journalist and the author of The Quiet Don, Deconstructing Sammy, and A Beautiful Child. His work has been featured in a host of publications including Reader’s Digest, Playboy, Rolling Stone, the New York Times, the Philadelphia Inquirer, and People magazine. He has appeared on a variety of network and cable news programs, including CNN, ABC’s 20/20, NBC, CBS, and Investigation Discovery, among others, and was celebrated by the New York Times Book Review for his “killer leads, gripping kickers, and sensational descriptions.”

Praise for A Deadly Secret

“A startling inside look at the politics of police work.”—Westchester County Times

Praise for the work of Matt Birkbeck

“A stunning work of  investigative journalism."—Nicholas Pileggi, author of Wiseguy