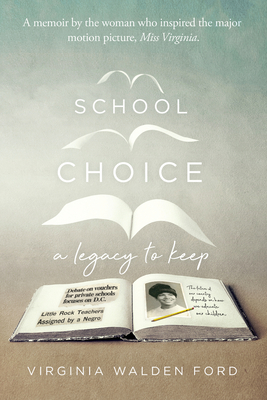 On a cold winter night in February of 1967, a large rock shattered a bedroom window in Virginia Walden Ford’s home in Little Rock, Arkansas, landing in her baby sister’s crib. Outside, members of the Ku Klux Klan burned a cross on her family’s lawn. Faceless bigots were terrorizing Virginia, her parents, and her sisters–all because her father, Harry Fowler, dared to take a job as the assistant superintendent of personnel for the Little Rock School District. He was more than qualified, but he was black. In her searing new memoir, legendary school choice advocate Virginia Walden Ford recounts the lessons she learned as a child in the segregated south. She drew on those experiences—and the legacies handed to her by her parents and ancestors—thirty years later, when she built an army of parents to fight for school choice in our nation’s capital. School Choice: A Legacy to Keep, tells the dramatic true story of how poor D.C. parents, with the support of unlikely allies, faced off against some of America’s most prominent politicians—and won a better future for children.

Virginia Walden Ford is one of America’s leading advocates for parent empowerment. As a student, mother, advocate, and grandmother, she has spent her lifetime fighting to create new educational opportunities for children and families. A native of Little Rock, Arkansas and the daughter of two public school educators, Virginia and her twin sister, Harrietta, were among the second wave of students chosen to desegregate Little Rock Central High School in the mid-1960s. While she was raising her three children in Washington, D.C., Virginia created D.C. Parents for School Choice and built an army of parents to successfully advocate for the passage of the D.C. Opportunity Scholarship Program. This dramatic seven-year fight, and Virginia’s role in it, was the inspiration for the feature film, Miss Virginia, starring Uzo Aduba, Matthew Modine, Amirah Vann, Vanessa Williams and Niles Fitch. Today, Virginia lives, once again, in Little Rock, Arkansas. She travels the country speaking to parents and education groups, encouraging moms and dads and grandparents to discover the value of their voices and the importance of their advocacy. Virginia is the proud mother of Michael Walden (and mother-in-law to Nikki Walden), of Miashia Walden Gaye, and of William Walden; she is the proud grandmother to Yamundow Virginia, Chloe, Jeremiah, and Genesis.