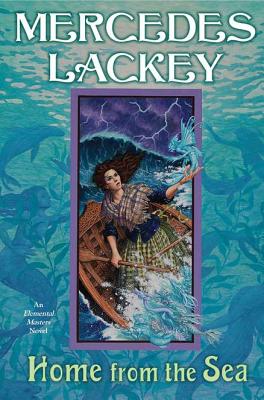 By Mercedes Lackey
Email or call for price.
Not available

This is book number 7 in the Elemental Masters series.

The seventh novel in Mercedes Lackey's magical Elemental Masters series reimagines the fairy tale East of the Sun, West of the Moon in a richly-detailed alternate Victorian England

For as long as she could remember, Mari Prothero had seen things—things that shouldn’t, that couldn’t be real: tiny manlike creatures that were mischievous and wore only seaweed, and beings that spoke to her kindly, but seemed to be made of water. Mari had grown up in tiny Welsh fishing village where she lived alone with her father, Daffyd, a master fisherman—her mother and brother having drowned when she was a child. Mari had long ago given up trying to talk to her father about the creatures she saw.

But on the morning of her eighteenth birthday, her father finally told her the great secret of the Prothero family. Her family had an ancient covenant with magical shape-shifters, the Selch, who were half-human, half-seal people. Her lost mother and brother were not truly dead, but neither were they human. Now Mari must abide by her family’s magical compact, or face dire consequences.

But Mari was not without protectors. The tiny creatures she had seen her whole life counseled her to bargain with the Selch. While in faraway London, Lord Alderscroft, head of the Elemental Masters, was aware that a powerful but untrained Water Master on the far coast of Wales was being threatened by some of the Elemental Elder Spirits, and he had dispatched some very unique champions to come to Mari’s aid....