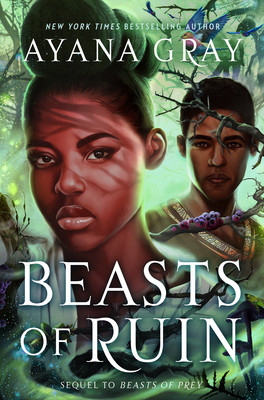 In this much anticipated follow up to New York Times bestselling Beasts of Prey, Koffi’s powers grow stronger and Ekon’s secrets turn darker as they face the god of death.

After having promised to use her new powers to serve Fedu, the cunning god of death, and assist in his plans to remake the world, Koffi finds herself a prisoner in Thornkeep—a luxurious mansion with well-manicured gardens. But Fedu’s beautiful realm is a lie. Koffi and many other darajas are trapped there by a deadly, inscrutable mist, making escape impossible. But something within the mist calls to Koffi, igniting her magic. It soon becomes clear that the very thing imprisoning her could be the key to not only her freedom, but finally unlocking the remaining mysteries of her own magic, allowing her to fight the god of death and perhaps even win.

While Koffi attempts to decipher the secrets of the mist and learns to wield her own deadly power, Ekon is determined to make his way to Thornkeep to fight alongside her. But leaving Lkossa is easier said than done. Ekon, once a promising soldier, is now a wanted man on the run from those he once called brother. He’s forced to make new, uneasy alliances to flee Lkossa and turn his back on everything he once believed. And each day he draws closer to the realm of death, so too does Ekon draw nearer to a long-hidden truth about himself that could change his loyalties forever.

Koffi and Ekon—separated by both land and gods—risk everything to reunite. But the longer they’re apart, the more they will have to reckon with changing destinies and, maybe, changing hearts.

Ayana Gray is a New York Times bestselling young adult fantasy author and a lover of all things monsters, mythos, and magic. Originally from Atlanta, Georgia, she now lives in Little Rock, Arkansas, where she reads avidly, follows Formula One racing, and worries over the varying moods of her adopted baby black rhino, Apollo, and her mini goldendoodle, Dolly. Her debut novel, Beasts of Prey, is being adapted for feature film.

Praise for Beasts of Ruin:
A 2022 Kirkus Best Book

“This stellar sequel deepens these beautifully realized main characters and keeps you wanting more stories in this world.” —Buzzfeed

★ “Readers will be entranced as themes of heritage, betrayal, and erasure are brought to life with vivid details in this riveting, fast-paced volume that lives up to its predecessor. . . An absorbing story with tantalizing hints of more to come.” —Kirkus Reviews, starred review

“Gray’s lush and detailed worldbuilding remains a highlight as the sequel delves even deeper into the history and heritage of Lkossa and its surrounding kingdom.” —Paste Magazine

“Well-crafted and engaging. . . Beasts of Prey and Beasts are Ruin are riveting reads that should hold great appeal for teenage readers, especially fans of Black Panther and The Hunger Games.” —The Atlanta Journal-Constitution

“Beasts of Ruin, like its predecessor, is filled with action and tension. There are fights, spells, chases, twists, betrayals, a wicked villain and fantastical creatures throughout the novel’s short, punchy chapters. She weaves African myths and legends of frightening creatures like the kongamato into her narrative, and explores the impact of discrimination and cultural erasure.” —Arkansas Democrat Gazette

“[A] tale of courage, curiosity, and magic.”—SHEEN Magazine

“Gray returns to her captivating world of beasts, secrets, and vengeful gods in this follow-up. . . boast[ing] a more expansive world… Readers who easily lost themselves in Koffi and Ekon’s story will devour their continued journey. . . An engaging sequel gearing up for an explosive third book.” —Booklist

“Gray’s writing balances high stakes with strong narrative voices as she expands on the cast of characters. Themes of heritage, segregation, and erasure all play roles in Ekon and Koffi’s growth, and readers will easily draw parallels to the U.S. Civil Rights Movement.” —School Library Journal

"The hunt for your next YA fantasy book trilogy obsession has ended." —Entertainment Weekly

“A propulsive mystery mixed with a moving coming-of-age tale and a touch of romance, Beasts of Prey asks: When we go into the jungle, who will we be when we come out?” —The New York Times Book Review

★ “This pan-African story, rife with betrayal and narrated through poetic language that evokes vivid imagery, will ensnare readers, keeping them engaged with its energetic pace. The beautiful blend of mythology, romance, and action ends with a hint at more to come… A dazzling debut.” —Kirkus Reviews, starred review

★ “Gray's debut is a thrilling series opener with twists and turns that will delight. Hints about more expansive world building to come will entice readers to pick up future volumes in this must-buy for fantasy enthusiasts.” —Booklist, starred review

★ “With its memorable characters, and a lush, expansive world, Gray’s debut is an action-packed adventure that will tug at hearts and keep teens glued to the page, yearning for more. Essential for all collections.” —School Library Journal, starred review

“Rich in magic and mythos, Beasts of Prey is a feast for all the senses. Prepare to be transported to Koffi’s world from the first page and find yourself lost not only in the dark thrill of the hunt but the poignant beats of emotion at the heart of this story. Gray’s writing is lyrical, her imagery vivid. I eagerly await whatever she pens next.” —Renée Ahdieh, New York Times bestselling author of The Beautiful

“A fast-paced, rip-roaring ride that grabs you by the throat and never lets you go. A masterpiece of magic.” —Namina Forna, New York Times bestselling author of The Gilded Ones