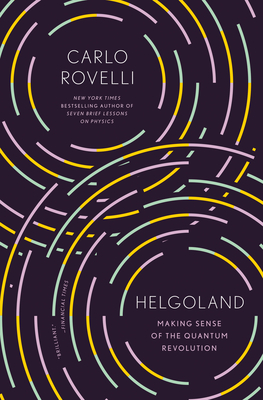 “Rovelli is a genius and an amazing communicator… This is the place where science comes to life.” ―Neil Gaiman

“One of the warmest, most elegant and most lucid interpreters to the laity of the dazzling enigmas of his discipline...[a] momentous book” ―John Banville, The Wall Street Journal

A startling new look at quantum theory, from the New York Times bestselling author of Seven Brief Lessons on Physics, The Order of Time, and  Anaximander.

One of the world's most renowned theoretical physicists, Carlo Rovelli has entranced millions of readers with his singular perspective on the cosmos. In Helgoland, he examines the enduring enigma of quantum theory. The quantum world Rovelli describes is as beautiful as it is unnerving.

Helgoland is a treeless island in the North Sea where the twenty-three-year-old Werner Heisenberg made the crucial breakthrough for the creation of quantum mechanics, setting off a century of scientific revolution. Full of alarming ideas (ghost waves, distant objects that seem to be magically connected, cats that appear both dead and alive), quantum physics has led to countless discoveries and technological advancements. Today our understanding of the world is based on this theory, yet it is still profoundly mysterious.

As scientists and philosophers continue to fiercely debate the meaning of the theory, Rovelli argues that its most unsettling contradictions can be explained by seeing the world as fundamentally made of relationships rather than substances. We and everything around us exist only in our interactions with one another. This bold idea suggests new directions for thinking about the structure of reality and even the nature of consciousness.

Rovelli makes learning about quantum mechanics an almost psychedelic experience. Shifting our perspective once again, he takes us on a riveting journey through the universe so we can better comprehend our place in it.

Carlo Rovelli is a theoretical physicist who has made significant contributions to the physics of space and time. He has worked in Italy and the United States and currently directs the quantum gravity research group of the Centre de Physique Théorique in Marseille, France. His books, including Seven Brief Lessons on Physics, The Order of Time, and Helgoland, are international bestsellers that have been translated into more than fifty languages.

“Popular science has rarely been so good.” ―Prospect

“It was with great joy that I discovered and consumed Carlo Rovelli’s latest offering. . . . Helgoland hooked me so hard I read the entire book in one sitting. And then twice more.” —Lisa Feldman Barrett, The Chronicle of Higher Education

“One of the warmest, most elegant and most lucid interpreters to the laity of the dazzling enigmas of his discipline...[a] momentous book.” ―John Banville, The Wall Street Journal

“Bracing and refreshing…Rovelli is offering a new way to understand not just the world but our place in it, too.” —NPR

“A remarkably wide-ranging new meditation on quantum theory with the light touch of a skilled storyteller.” ―The Guardian

“Rovelli tackles both the quantum realm and the ways it helps us make sense of the mind with refreshing clarity.” —Anil Ananthaswamy, The New York Times Book Review

“This entertaining and legible guide paints the history of quantum theory and lays out its possible meanings.” —Scientific American

“Physicist Rovelli (The Order of Time) dazzles with this look at the 'almost psychedelic experience’ of understanding quantum theory…These are big ideas, but Rovelli easily leads readers through the knotty logic, often with lyricism…Readers who follow along will be left in awe.” —Publisher's Weekly, STARRED REVIEW

“Charmingly idiosyncratic. . . . [Rovelli is] perhaps the finest author now writing on physics and the quantum world.” —The Article

“Rovelli is a genius and an amazing communicator… This is the place where science comes to life.” —Neil Gaiman

“Helgoland is Rovelli’s most beautiful yet… Unforgettable.” ―The London Times

“Another brilliant book by Rovelli, who is emerging as the most approachable yet authoritative contemporary writer about quantum physics. He describes a 'relational' universe in which there are no absolutes and everything depends on interactions between objects. You won’t understand quantum mechanics after reading this—or any other book—but you’ll have fun trying.” —Financial Times

“If anyone can make sense of the topsy-turvy, counterintuitive world of quantum physics, it is Carlo Rovelli.” ―The Times