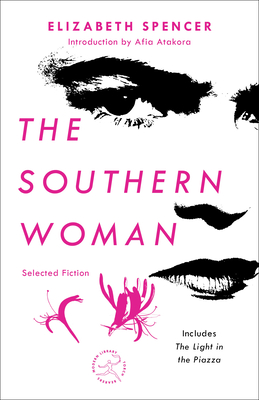 A stunning collection of stories from “one of the foremost chroniclers of the American South” (The Washington Post), including the novella “Light in the Piazza”—featuring an introduction by Afia Atakora, author of Conjure Women

Over the course of a fifty-year career, Elizabeth Spencer wrote masterly, lyrical fiction about southerners. An outstanding storyteller who was unjustly denied a Pulitzer for her anti-racist novel The Voice at the Back Door despite being the unanimous choice of the judges, she is recognized as one of the most accomplished writers of short fiction, infusing her work with elegant precision and empathy.

The Southern Woman collects the best of Spencer’s short stories, displaying her range of place—the agrarian South, Italy in the decade after World War II, the gray-sky North, and, finally, the contemporary Sun Belt.

The Modern Library Torchbearers series features women who wrote on their own terms, with boldness, creativity, and a spirit of resistance

Elizabeth Spencer (1921–2019) was the author of nine novels and novellas and three other short-story collections. She was raised in Mississippi, where tales of the Civil War lingered and segregation seemed permanent, during the Great Depression. Spencer’s wanderings took her to Italy in 1953, to Montreal in 1958, and back to the South in 1986.

“A national treasure . . . [Elizabeth Spencer] is indispensable witness to the difficulties of having a home and then leaving it, to the struggles of smart, sexually alive young women trying to find their way in the world.”—The Paris Review

“There seems to be nothing this extraordinary writer can’t do.”—The New York Times

“One of the foremost chroniclers of the American South.”—The Washington Post

“A retrospective collection of twenty-seven stories, written over a period of more than half a century, by a Southern writer whose best fiction merits comparison with the work of Katherine Anne Porter and Eudora Welty.”—Kirkus Reviews (starred review)

“Spencer is a spellbinding storyteller. Her stories . . . are dense and rich as novels, as light as air; they hover in the mind like hummingbirds.”—Lee Smith

“What [Spencer’s] stories do wonderfully, for me, is explore the ties that bind–in families, friendships, communities, marriages–how mysterious, twisted, chafing, inescapable, and life-supporting such ties are.”—Alice Munro

“A writer one puts on the ‘permanent’ shelf. These stories will be read and reread.”—James Dickey