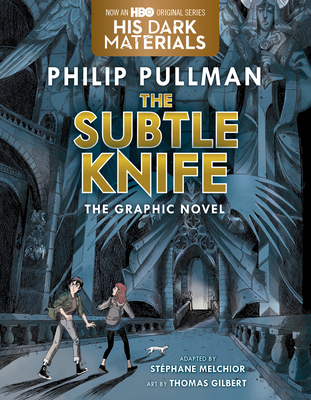 By Philip Pullman
$21.99
Email or call for price

This graphic novel adaptation of The Subtle Knife is a great entry for readers new to His Dark Materials and an exciting new look at the classic for existing Pullman fans.

Philip Pullman's world is brought to visual life in The Subtle Knife Graphic Novel, a companion to the successful The Golden Compass Graphic Novel. The stunning full-color art will offer both new and returning readers a chance to experience the story of Lyra, an ordinary girl with an extraordinary role to play in the fates of multiple worlds, in an entirely new way.

In The Subtle Knife, Lyra meets Will--a boy on the run, a murderer--a worthy and welcome ally. For this is a world where soul-eating Specters stalk the streets and witches share the skies with troops of angels.

Each is searching--Lyra for the meaning of Dark Matter, Will for his missing father--but what they find instead is a deadly secret, a knife of untold power. And neither Lyra nor Will suspects how tightly their lives, their loves, their destinies are bound together...until they are split apart.

PHILIP PULLMAN is best known for the His Dark Materials trilogy, which has been named one of the top 100 books of all time by Newsweek and one of the all-time greatest novels by Entertainment Weekly. Pullman was knighted for services to literature in the 2019 New Year Honours.

Philip Pullman is also the author of four volumes related to His Dark Materials: Lyra's Oxford, Once Upon a Time in the North, Serpentine, and The Collectors. And a new trilogy set in the same world, The Book of Dust, which began with La Belle Sauvage and continues with The Secret Commonwealth.

Philip Pullman lives in Oxford, England. To learn more, please visit philip-pullman.com or follow him on Facebook at Philip Pullman author, and on Twitter at @PhilipPullman.

STÉPHANE MELCHIOR has worked as a screenwriter for both film and television. Recently, he turned his creative energies toward comics, penning both original stories and adaptations, including Raiju and Raiden with Loïc Sécheresse and an adaptation of The Great Gatsby with Benjamin Bachelier.

THOMAS GILBERT spent a year studying the fine arts in Paris and three more at the Saint-Luc Institute in Brussels, specializing in comics. His primary influences came from L'Association, which taught him the importance of the author's perspective in developing a narrative.

"It’s no small feat to take a story as dense as this one and render it into a graphic novel, but fans of the series will be rewarded with lovingly depicted characters, vivid illustrations, and thrilling adventure. A worthy addition to the series, brought to life with stunning art." —SLJ

"In this graphic adaptation of Pullman’s classic, Will, a boy from our world in search of his father, stumbles upon a window into another world. There, he meets Lyra and her dæmon, Pantalaimon, who have traveled from their own world, leaving behind both allies and enemies, in search of answers about the ineffable Dust. The art shines when depicting the fantastical worlds the characters inhabit, including sweeping landscapes and cityscapes." —Kirkus Reviews