The Making of Another Major Motion Picture Masterpiece: A novel (Hardcover) 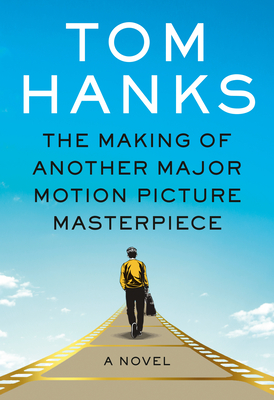 From the legendary actor and best-selling author: a novel about the making of a star-studded, multimillion-dollar superhero action film...and the humble comic books that inspired it. Funny, touching, and wonderfully thought-provoking, while also capturing the changes in America and American culture since World War II.

Part One of this story takes place in 1947. A troubled soldier, returning from the war, meets his talented five-year-old nephew, leaves an indelible impression, and then disappears for twenty-three years.

Cut to 1970: The nephew, now drawing underground comic books in Oakland, California, reconnects with his uncle and, remembering the comic book he saw when he was five, draws a new version with his uncle as a World War II fighting hero.

Cut to the present day: A commercially successful director discovers the 1970 comic book and decides to turn it into a contemporary superhero movie.

Cue the cast: We meet the film’s extremely difficult male star, his wonderful leading lady, the eccentric writer/director, the producer, the gofer production assistant, and everyone else on both sides of the camera.

Bonus material: Interspersed throughout are three comic books that are featured in the story—all created by Tom Hanks himself—including the comic book that becomes the official tie-in to this novel’s "major motion picture masterpiece."

TOM HANKS has won Academy Awards for best actor for Philadelphia and Forrest Gump. He has starred in, among many other films, Big, Sleepless in Seattle, Apollo 13, Saving Private Ryan, The Green Mile, Cast Away, Catch Me If You Can, Captain Phillips, Bridge of Spies, Sully, Toy Story, The Post, and It's a Beautiful Day in the Neighborhood. His writing has appeared in The New York Times, Vanity Fair, and The New Yorker. He is also the author of a best-selling collection of stories, Uncommon Type.

R. Sikoryak is a cartoonist and an author based in New York City. His illustrations have appeared in The New Yorker, The New York Times Book Review, and The Daily Show with Jon Stewart.

"The Making of Another Major Motion Picture Masterpiece is its own universe, complete with a sun, a cast of circling planets, and a limitless number of stars. Its gravity pulls you in and its far reaching, multi-layered, rollicking exuberance holds you in place. I would have been happy to live inside this book forever." —Ann Patchett, best-selling author of These Precious Days

"This is a wild, ambitious and exceptionally enjoyable novel. A story about how stories happen, with a swirling kaleidoscope of characters across the best part of a century, and a real beating emotional heart. It has a lot of astute and fascinating things to say about comic books, movies, show business, America and human beings. I loved every page." —Matt Haig; author The Midnight Library, The Humans and Reasons to Stay Alive

"An extravagant, buoyant, joyfully sprawling book, bursting with affection for its characters, for the intricate lore of the movie business, and for the many ways in which human beings are one another's greatest opportunity." —Tana French, award-winning novelist of In The Woods and The Searcher

"Do you want to go on an adventure? Who doesn't? This was a joy to read in that certain kind of way that only happens when it was a joy to write. Tom Hanks is such a natural storyteller that everything feels like he's telling this story just for you, at a dinner table, and you don't want the night to end." —Fredrik Backman, author of A Man Called Ove

“With a unique insight and a rare eye for detail, Tom Hanks delivers a stunning, emotionally satisfying tale about the art of storytelling. I never wanted the lights to come up. I could not put it down.” —Graham Norton

"Vibrant, jazzy, witty, snazzily written, with a great sense of time and place, this novel-cum-comic book is one of those rare, unique, pieces of fiction. Loved it."
—Kate Mosse; author of Labyrinth