The Forgotten Girls: A Memoir of Friendship and Lost Promise in Rural America (Hardcover) 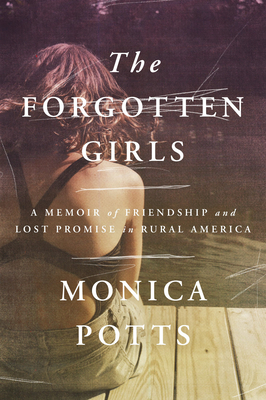 Talented and ambitious, Monica Potts and her best friend, Darci, were both determined to make something of themselves. How did their lives turn out so different?

Growing up gifted and working-class poor in the foothills of the Ozarks, Monica and Darci became fast friends. The girls bonded over a shared love of reading and learning, even as they navigated the challenges of their tumultuous family lives and declining town—broken marriages, alcohol abuse, and shuttered stores and factories. They pored over the giant map in their middle-school classroom, tracing their fingers over the world that awaited them, vowing to escape. In the end, Monica left Clinton for college and fulfilled her dreams, but Darci, along with many in their circle of friends, did not.

Years later, working as a journalist covering poverty, Potts discovered what she already intuitively knew about the women in Arkansas: Their life expectancy had dropped steeply—the sharpest such fall in a century. This decline has been attributed to “deaths of despair”—suicide, alcoholism, and drug overdoses—but Potts knew their causes were too complex to identify in a sociological study. She had grown up with these women, and when she saw Darci again, she found that her childhood friend—addicted to drugs, often homeless, a single mother—was now on track to becoming a statistic.

In this gripping narrative, Potts deftly pinpoints the choices that sent her and Darci on such different paths and then widens the lens to explain why those choices are so limited. The Forgotten Girls is a profound, compassionate look at a population in trouble, and a uniquely personal account of the way larger forces, such as inheritance, education, religion, and politics, shape individual lives.

Monica Potts is a senior politics reporter for the website FiveThirtyEight. Her work has appeared in The New York Times, The Atlantic, and The New Republic, among other publications, and on NPR. She has been a New America fellow and a senior writer with The American Prospect magazine.

The Forgotten Girls is much more than a memoir; it's the unflinching story of rural women trying to live in the most rugged, ultra-religious and left-behind places in America. Rendering what she sees with poignancy and whip-smart analyses, Monica Potts took a gutsy, open-hearted journey home and turned it into art.”—Beth Macy, author of Dopesick and Raising Lazarus

“The Forgotten Girls is beautiful and hard, a deeply reported memoir of a place, a friendship, a childhood and a country riven by systemic injustices transformed into individual tragedies. Monica Potts is a gifted writer; I read this extraordinary story of friendship and sisterhood, ambition and loss in rural America in one sitting; it is propulsive, clear and really important.”—Rebecca Traister, author of Good and Mad

“A troubling tale of heartland America in cardiac arrest, of friendship tested, of meth and Sonic burgers and every other kind of bad nourishment, of what we have let happen to our rural towns, and what they have invited on themselves. A personal and highly readable story about two women in a small cranny of America, but which offers an illuminating panorama of where our country stands.”—Sam Quinones, author of Dreamland and The Least of Us

“A tender memoir of a lifelong friendship and a shocking account of hardship in rural America, The Forgotten Girls is beautifully written, painstakingly researched and deeply affecting.”—Paula Hawkins, author of The Girl on the Train

“In a landscape where writing grounded in true events is expected to be either objective reporting about events from which the writer is fully detached or confessional lived experience, Monica Potts has created a rare mix of reportage and memoir that brings the best of both forms to bear on an empathetic and nuanced examination, told from an insider's perspective, of what it means to be working class, white, and female in America today.”—Emma Copley Eisenberg, author of The Third Rainbow Girl

“I couldn’t put it down. . . American culture has a toxic forgetting at its heart, a forgetting about communities that have lost their way and a blindness to why they fail. It made me think of so many people's lives in small towns and rural areas in Britain—a powerful reminder that when you forget about people and consign them to eternity in failing places, then you create something deeply harmful for all of us. It is an important book, raw and simple enough that you can’t help but feel it deeply.”—James Rebanks, author of The Shepherd’s Life

“A compassionate look at the rapid decline in life expectancy among “the least educated white Americans” . . . Potts draws on extensive interviews with friends and family to reveal how poverty, generational trauma, substance abuse, and the suffocating righteousness of the evangelical church limit women’s options in places like Clinton. . . . A potent study of what ails the depressed pockets of rural America.”—Publishers Weekly