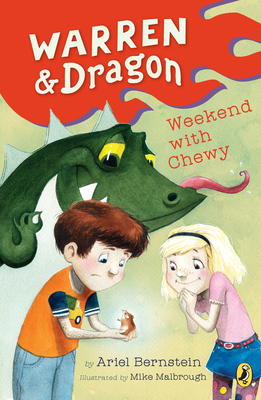 This is book number 2 in the Warren & Dragon series.

With Calvin and Hobbes appeal, a boy and his "pet" dragon take the school hamster home, to hilarious results!

Warren is a seven-year-old boy. Dragon is part stuffed animal, part fierce dragon, and part best friend--depending on what you believe most. And Chewy is the class hamster. So when it's Warren's turn to take Chewy home for the weekend, Warren isn't so sure it's the best idea. Do dragons and hamsters mix? Not so well, it turns out, especially when Warren and Dragon are more interested in making cool stuff with their new friends than taking care of a rodent--until Chewy disappears. Oh no!

Besides writing children's books, she's worked in a movie theatre, at a Baskin Robbins, as a camp counselor, a paralegal, in human resources, and as a stay-at-home mom.
Visit her at arielbernsteinbooks.com.