The Salt Lick Cookbook: A Story of Land, Family, and Love (Hardcover) 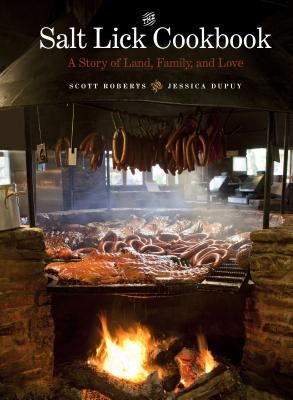 By Scott Roberts, Jessica Dupuy
$39.95
Email or call for price

In Texas and throughout the South, myriad barbecue joints claim the title of "best barbecue." Many barbecue enthusiasts would nearly fight to the death to defend their favorite, and the Salt Lick is certainly a contender. But Salt Lick owner Scott Roberts doesn't care about that. He's more interested in the smiles on his customers' faces as they leave the restaurant. With more than 600,000 customers served each year, he may be onto something.

That's because Roberts is building on the foundation his family laid down more than 130 years ago, as his great-grandparents made their long journey to Texas. On the trail, they prepared food and cooked meat in ways that preserved it. Roberts keeps those techniques because they are simple and proven. His great-grandparents settled in Driftwood in the 1870s, and his grandparents farmed the land and were sustained by its bounty. They helped raise Roberts and instilled in him a love of the rural way of life.

This is not a book just about Salt Lick barbecue. It's about how the barbecue came to be: a story of respect for the land, its history, and the family that planted its roots in Driftwood and cultivated a well-deserved reputation.