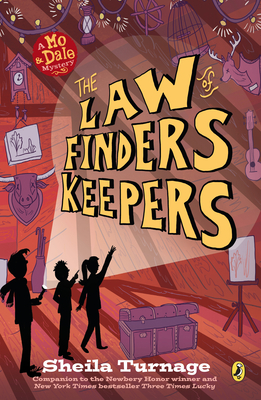 “Oh, what pure joy to head back to Tupelo Landing, to hear Mo LoBeau's voice again, and to delve into the Desperado Detective Agency’s final case. Thrills and intrigue abound as a hunt for pirate's treasure leads to information about the identity of Mo's oft-mentioned ‘Upstream Mother.’ I've loved this series from the very beginning and love sharing it with other readers, young and old!”
— Kathleen Carey, Book House of Stuyvesant Plaza, Albany, NY

The heart-warming conclusion to the beloved Mo & Dale Mysteries by Newbery Honor author Sheila Turnage featuring the most shocking case yet!

Pirate fever sweeps through the town after an opportunistic treasure hunter shows up looking to lay claim to Blackbeard's lost gold buried somewhere in Tupelo Landing. When the (probably) world-famous Desperado Detectives--Mo and Dale and Harm--are hired by Mayor Little's mother to find the pirate loot for her, and the high-stakes race for riches is on!

But that's not the only treasure hunt in town. Mo LoBeau unearths shocking new clues that may lead to her long-lost Upstream Mother--in the riskiest, scariest, and possibly richest case of her life.
Will Mo find her Upstream Mother? Can the Desperados sidestep Blackbeard's curse and outsmart a professional treasure hunter? Will Dale faint under the pressure of Valentine's Day?

Could the stakes be any higher? Yes. With twin treasures hanging in the balance, Mo, Dale, and Harm realize one of them may have to leave Tupelo Landing. For good.

Sheila Turnage is from eastern North Carolina, just like Miss Moses LoBeau, the protagonist from Three Times Lucky. Her first novel for children, Three Times Lucky, is a Newbery Honor winner, a New York Times bestseller, an E.B. White Read-Aloud Honor Book, and an Edgar Award finalist. It has been nominated for six state awards and has been licensed in five countries. Her follow up book, The Ghosts of Tupelo Landing, also a New York Times bestseller, has received five starred reviews, is a SIBA Okra Winter 14 pick, and a Junior Library Guild selection. Sheila is also the author of two nonfiction adult titles: Haunted Inns of the Southeast and Compass American Guides: North Carolina, as well as one picture book, Trout the Magnificent illustrated by Janet Stevens. Her next children's book, The Odds of Getting Even (a Mo & Dale mystery) will be available in October 2015.

"[A] lively cast rich with heartfelt emotion . . . wit propels this fast-paced treasure-hunt tale into a pitch-perfect delight . . . if [readers] can get through the end without welling up, they're tougher than most—it's absolutely worth the wait."—Kirkus, starred review

“Turnage’s fine-tuned talent for storytelling is as evident as her understated, irrepressible humor and her creative ability to turn a phrase . . . The large, intergenerational cast of idiosyncratic characters enriches this first-person narrative at every turn. Amusing, dramatic, and tender.”—Booklist, starred review

“Every volume a standout, the Mo and Dale Mysteries series ends on as high a note—just as it began. Turnage delivers, once again, a fast-paced adventure with a cast of characters who are as real as they are quirky and laugh-out-loud dialog. . . . Readers of character-driven novels filled with humor will be thrilled by this smart and sweet series, start to finish.”—VOYA, starred review

"What do you get when you combine Because of Winn-Dixie's heart with the mystery and action of Holes? . . . Mo LoBeau is destined to become a standout character in children's fiction."—Kirkus, starred review

"Here is a writer who has never met a metaphor or simile she couldn't put to good use."—Publishers Weekly, starred review

"The heroine of Sheila Turnage's "Three Times Lucky" is so plucky that young readers may wish she lived next door."—Wall Street Journal

"A literary descendant of Scout Finch of "To Kill a Mockingbird"—Mo LoBeau announces this novel's mystery from behind the counter of the Tupelo Diner: 'There's been a murder and we're out of soup.'"—Newsday

"The perspicacious Mo LoBeau is at it again! . . . humor and action abound."—School Library Journal, starred review

"Just as its predecessor did, this sequel shines thanks to Turnage's deft, lyrical language and engaging characters."—Kirkus, starred review

"Turnage's ability to create convincing characters and her colorful use of language combine to make this a fresh, droll, rewarding trip to Tupelo Landing."—Booklist, starred review

"The budding detective has clearly taken to heart something her foster mother always emphasizes: 'All the world's a stage, sugar, so hop on up there.'"—Publishers Weekly, starred review


PRAISE FOR THE ODDS OF GETTING EVEN:
"With her mix of homespun humor, well-plotted mystery, and delicious characterization . . . Turnage's tale is full of heart."—Kirkus, starred review

"Another rewarding adventure . . . narrated by Mo in her distinctive, imaginative voice. The writing lulls you with laughter, then occasionally blindsides you with unexpected tenderness."—Booklist, starred review

"Well crafted, with fast pacing; readers will gallop through the nonstop action to a satisfying conclusion. A must-read for fans of the first two volumes, and a rewarding adventure all on its own."—School Library Journal

"Turnage's rich voice, abundance of heart, and wicked sense of humor handle the dynamics of the town with verve . . . [A] clever, sweet, laugh-out-loud funny series."—VOYA

"Friendship prevails in this fine novel . . . There's a complexity to the characters, from mean-as-a-snake Macon to drop-dead-handsome Lavender, all carefully developed throughout the series, creating a terrific read."—Horn Book

"A rousing tale of action, adventure, and intrigue. . . . So sit back and enjoy a well-told yarn that is sure to please readers of all ages."—SLC