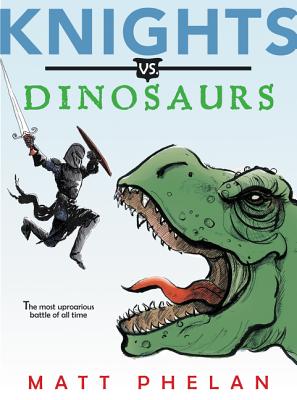 “In Knights vs. Dinosaurs, Matt Phelan has created a roaring romp of a good time, bringing together the Knights of King Arthur’s Round Table and DINOSAURS! Though it may at first glance seem a book for boys, a plot twist will have girls loving it, too! With knights, dinosaurs, a wizard, and some great battles wonderfully illustrated by Phelan, this exciting tale demonstrates the value of being true to yourself while being part of a team.”
— Jim Hess, Let's Play Books!, Emmaus, PA

An ALA Notable Title

Renowned for their courage, their chivalry, and their ability to fight mythical creatures, the Knights of the Round Table must face their most dangerous opponents yet—DINOSAURS!

This heavily illustrated middle grade novel from award-winning author and artist Matt Phelan is a hilarious, rip-roaring tale of derring-do perfect for reluctant readers and fans of How to Train Your Dragon and The Terrible Two.

Let me tell you a secret about the Knights of the Round Table: they don’t have much to do. The realm is at peace and dragons are few and far between. So Merlin decides to send the knights out on a real adventure to a world filled with the most terrible lizards of all: DINOSAURS!

A great choice for reluctant readers, aspiring knights, and fans of Peter Brown’s The Wild Robot.

“This rollicking story is suspenseful and silly. An excellent choice for all readers.”—School Library Journal (starred review)

Matt Phelan is the creator of the graphic novels The Storm in the Barn (winner of a Scott O’Dell Award); Around the World; Bluffton; and the New York Times bestseller Snow White. He is also the author of Knights vs. Dinosaurs, Knights vs. Monsters, and Knights vs. the End (of Everything). Matt Phelan lives in Ardmore, Pennsylvania. www.mattphelan.com

Matt Phelan is the creator of the graphic novels The Storm in the Barn (winner of a Scott O’Dell Award); Around the World; Bluffton; and the New York Times bestseller Snow White. He is also the author of Knights vs. Dinosaurs, Knights vs. Monsters, and Knights vs. the End (of Everything). Matt Phelan lives in Ardmore, Pennsylvania. www.mattphelan.com

“Whether jousting with a triceratops or facing down a T-rex, [squire] Mel should come with a halo: She’s thoughtful, sensitive, and wise. ...Drawn deftly, lightly.”   — New York Times Book Review

“This rollicking story is suspenseful and silly. . . .double-page, comic book-like spreads that even reluctant readers will enjoy. Themes of teamwork and feminism emerge, making this an excellent choice for all readers.” — School Library Journal (starred review)

“Catnip for kids...absurdly entertaining. ...Gender stereotypes and egos are challenged along with dinosaurs, giving readers a spectacular book that’s victorious on all fronts.” — ALA Booklist (starred review)

“In a highly illustrated chapter book, four braggart knights and one underappreciated squire off against dinosaurs, all while learning about teamwork and honesty. ...As the time-traveling knights try to fight their way back to their true place in time, plot twists reveal the heroes’ true identifiers, adding depth to this hilarious slapstick romp.”  — Publishers Weekly (starred review)

“Phelan crafts a lighthearted romp of an adventure sure to please readers looking for a chapter book full of both action and humor. ...Pen-and-ink spot art and full-page illustrations, as well as intermittent comic-style sequential art, bring the swordplay action to the forefront and keep the tone light enough for the book’s young audience.” — The Horn Book

“Comedic...Phelan’s black and white art moves effectively from goofy portraitures and spot illustrations to speedy panels and dramatic full spreads, matching the humor and/or action of the plot.” — Bulletin of the Center for Children’s Books