All Quiet At Mena: A Reporter's Memoir of Buried Investigations by Mara Leveritt

All Quiet at Mena is Mara Leveritt’s personal account of the obstacles faced by investigators reporting on one of the most secretive episodes in America’s long war on drugs.

Starting with the crash that killed Emile Camp, a co-pilot of the notorious cocaine smuggler Barry Seal, she explores how a money laundering investigation prompted by Seal’s move to Arkansas collided with Reagan-era politics, leaving the drug war’s touted objectives—and law enforcement itself—in the wreckage.

Seal’s presence at Mena forced investigators in Arkansas to confront an array of questions that grew increasingly uncomfortable during the four years his planes were there. Among them: Why were DEA agents not revealing what they knew about the smuggler? Why were witnesses in a money laundering case who had agreed to appear before a grand jury never called to testify; And why, after Seal became an informant, were members of his organization—including those who’d serviced and harbored his planes at Mena—not prosecuted?

Drawing on extensive interviews with state and federal investigators, access to hundreds of FBI records, and her reporter’s familiarity with Arkansas, Leveritt exposes the secrecy that thwarted investigations into activities of his associates at Mena. Even today, decades after Seal’s murder, sensitivities about this little-known piece of Arkansas history remain so acute that the resistance she encountered in writing the book became an unexpected part of the story. The title All Quiet at Mena evokes the hush that has stifled this story -- at the same time it bows to Erich Maria Remarque’s great book about an earlier misbegotten war. 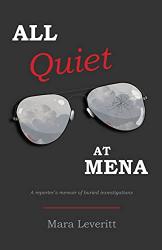